I was in Trader Joe’s the other day and noticed one of those boxed gingerbread kits in the “impulse buy” section. I’ve never seen one for Halloween before! But the thought of it excited me. I contemplated, as I stood in line, whether or not to buy one. Every time we attempt building one, it falls over, or the kids eat all the candy, or our giant dog knocks it off the counter and eats it. But I sure do love building them! So I grabbed one and put it in my basket.

I told Turner that we would build it after school on Monday. He was counting down the seconds! Yesterday, after Gracie’s nap and his quiet time, we started the festivities. We put on our Fall Music (a.k.a Nat King Cole), lit our pumpkin spice candle, and got to work! They were each in charge of kneading the bags of icing which they thought was extremely thrilling. Once they were finished, I assembled the house. We had to let it sit for a few minutes to dry before decorating. That’s the mistake we’ve always made in the past! We would start decorating, and the whole thing would collapse. I finally learned my lesson. So we sorted our candy and waited!

I put the icing on, and the kids added the candy. I think Gracie ate more than she put on the house. At one point she had shoved so much candy in her mouth that she looked like a chipmunk! I kept trying to push everything farther away from her so she would stop eating it. But she literally climbed on the counter so she could reach!

I fought the urge to try to control their decorating, but every part of me wanted to tell them what to do. You know, the way my older brother did to me as a kid? So, instead, I decorated my side and let them decorate theirs :o) 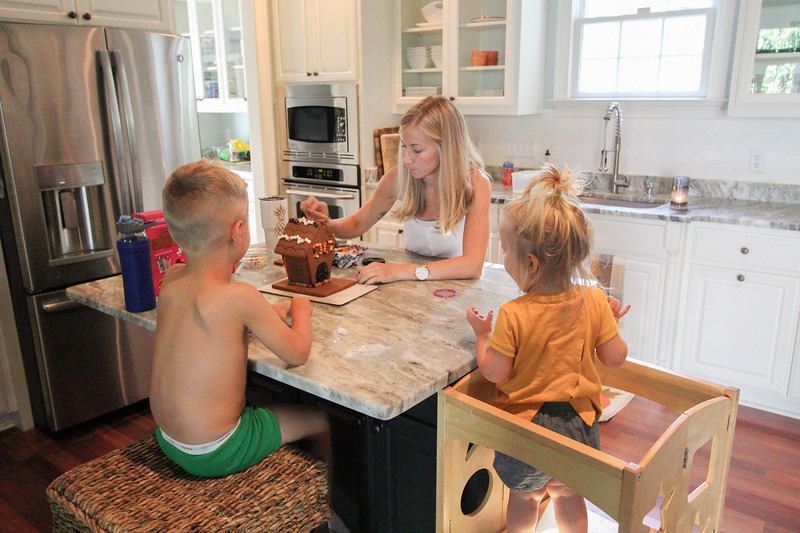 And Stew walked in just in time to get a photo of me giving them the Mom Eye threatening their very existence if they ate another piece of candy!

I’m not sure what I expected. Giving kids three bowls of candy and expecting them not to eat it is just setting them up for failure. But we finished our house! And we had a lot of fun doing it which is all that matters, right? Here is the finished product!

Now that the weather is cooler and it’s October, we’re officially ready for the holidays!